The Speedo LZR, a racing swimsuit made from ultralightweight, high tech fabric is known worldwide as the fastest swim suit ever made. First designed in 2000 under the name “Speedo Fast Skin” the suit was heavily influenced by sharkskin, made from Teflon coated lyrca, reducing drag and overall water resistance. With a full body suit the lyrca material almost acted as a tighter extra layer of skin “…designed to compress the body’s muscles and help contain any deviations from a swimmers body alignment in order to maximize performance”. (O’Donovan, 2012; p.3) Despite the suit not being widely used at its first appearance at the 2000 Sydney Olympics, controversy already began to stir over its unfair influences of an athlete’s performance – “13 of the 15 World Records broken in the suit and 83% of medals won by swimmers.” (Speedo.co.uk, 2013). The original Fast Skin suit came in 8 different silhouettes, 4 for women (Body, Knee, Open Back and Hydra) and 4 for men (Body, Knee, Leg, Hydra). 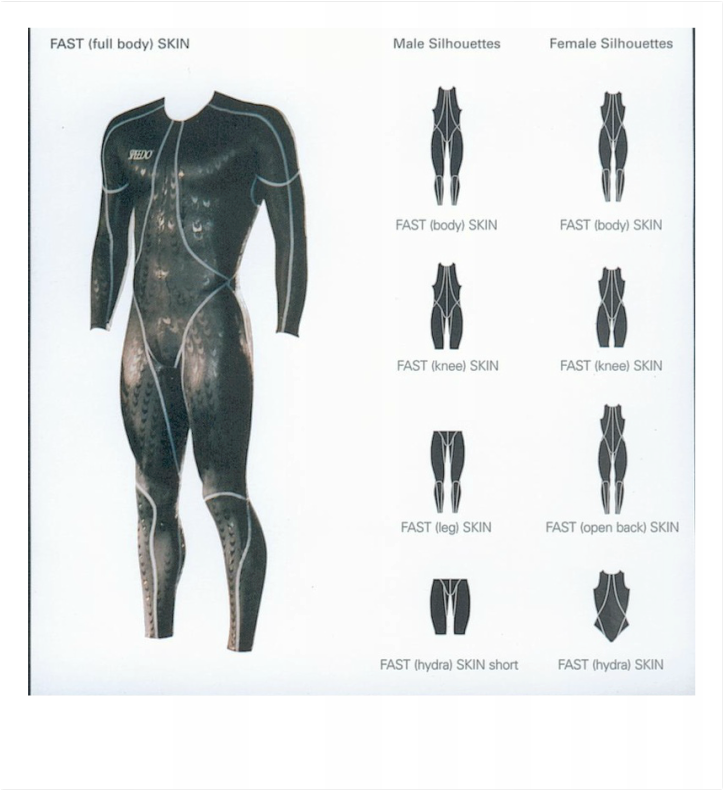 Making its first major appearance at the 2004 Athens Olympics games the FSII (Fast Skin II) became a globally recognised product. With technological and fabric based advances the new suit combined the existing lycra based innovation of the original FastSkin with Speedo’s evolutionary “FlexSkin”, resulting in a 4% drag reduction. With Speedo endorsing several well-known swimmers, the suits became extremely popular within the global competitive swimming market following the competition. Notably, American athlete Michael Phelps won 8 gold medals during the games, breaking all of his records in one of four FSII Speedo suits. (Speedo.co.uk, 2013)

The Fastskin Pro –The Dry Suit.

2007 saw Speedo continue its incremental innovation with the launch of the FastSkin Pro. Unveiled at the 2007 FINA World Championships the latest suit was not only lighter but featured Speedo’s new water-repellent material technology, LZR pulse. Decreasing drag even further and providing greater levels of muscle compression the suit was known for its drying abilities “After an hour in the pool, the FastSkin Pro only took 45 minutes to dry once out of the water, while Speedo’s previous star suit, the FastSkin II, took 16 hours” (O’Donovan, 2012; p.5). Improvements in The Fastskin Pro were obvious in the 6 months after its release with 21 world records being broken (Speedo.co.uk). In particular the FINA World Championships saw “76% of all swimmers who whore the FastSkin Pro personally swam faster than they ever had in their lives” (O’Donovan, 2012; p.5).

Speedo's 80th Anniversary & the Fastest Swim Suit on the Planet

In 2008, Speedo celebrated their 80th Anniversary by launching the FastSkin LZR Racer. Only a year on from their FastSkin Pro, their latest suit was the fastest swimming costume in the world. Speedo again utilised the 2008 Olympic Games in Beijing as a global launch pad for the product, endorsing a vast majority of national teams from the USA to Australia and Great Britain. Working alongside NASA to test the LZR’s drag ability and Italian company Mectex S p.A, the LZR combined high technology swimwear fabrics from polyurethane and elastane-nylon, to create a seamless body suit, improving buoyancy, streamline, support and posture. “The Beijing Olympics proved to be an unprecedented success for Speedo® and the LZR Racer®, with 92% of all of the medals won by athletes wearing the suit” (Speedo.co.uk).

With controversy building up around the use of tech suits ever since their production in 2000, the governing body of swimming called a ban on all polyurethane suits as of 2010. Click here to read more.

Following the FINA ban of 2010, Speedo was quick to release the FastSkin III (FSIII), a revolutionary design in line with the reviewed guidelines enforced by FINA. Compromised of a swimming hat, googles and suit, the FSIII is Speedos current racing range. However the impact the FSIII has had on performance has been significantly different in comparison to its predecessors. Read more on the future of Speedo here. 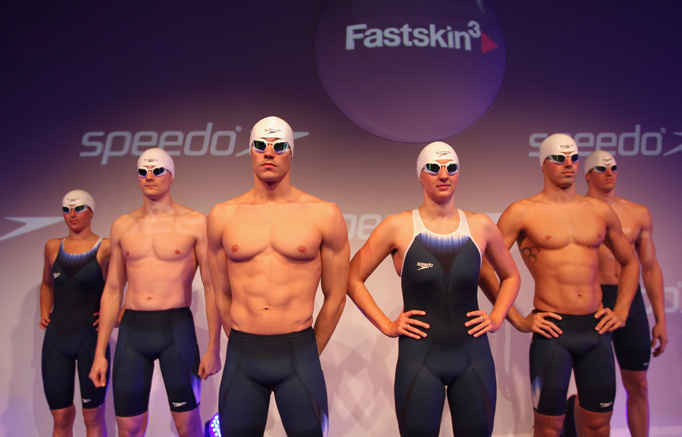