"The diffusion process is looked on by sociologist Everett M. Rogers as an orderly sequence of events. He proposes a diffusion curve which is essentially a normal curve of distribution..." (Robertson, 1967; p.16)
The “Diffusion of Innovation”  theory enables us to evaluate the distribution of an innovation, in relation market penetration and time. Split into 5 major adoption stages, we use the theory developed by Everett Rogers (1995) to analyse and understand at what stage the Speedo LZR Racer was distributed and accepted by different cultures/given societies. 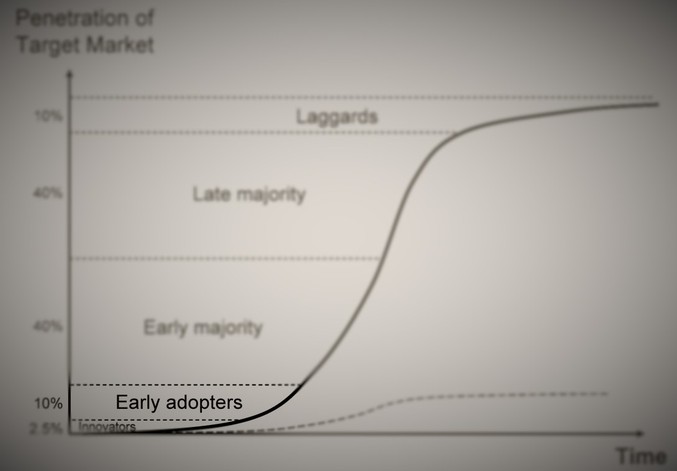 A key feature of Roger's (2003) works is the concept of "Rate of Adoption". As mentioned and highlighted above, adopters of new innovations or ideas can be categorized into 5 main stages; Innovators, Early Adopters, Early Majority, Late Majority and Laggards. With reference to Rogers (1995) work, Early Adopters are defined as those who

"...are on the lookout for a strategic leap forward in their lives or businesses and are quick to make connections between clever innovations and their personal needs.They love getting an advantage over their peers and they have time and money to invest. They’re often fashion conscious and love to be seen as leaders: social prestige is one of their biggest drivers. Their natural desire to be trend setters causes the “take-off” of an innovation. Early adopters tend to be more economically successful, well connected and well informed and hence more socially  respected." (Les Robinson, 2009; p.1)

Taking this definition into account, we would suggest that the Speedo LZR Racer falls under the Early Adopters category, with the reasons explained in more detail below.
Why is the Speedo LZR limited in the early adopter stage?

Through our diffusion analysis of the LZR Racer, it is also worthy to establish that the suit is limited to the early adopters stage. Taking into account the FINA Ban which shortly followed after the Beijing Olympics in 2008, the Speedo LZR Racer became an obsolete illegal product. Find out more in our FINA Ban and Success to Failure pages.
Powered by