When Speedo first released their FastSkin product range in 2000, it was hailed as one of the most advance progressions in the swimwear industry; one of the top 5 sports innovations of the past decade (Instabeat, 2012). Pre-2009 no specific laws or regulations deemed Speedo or any racing manufacture to be breaching manufacturing standards. Despite their being minor levels of controversy, Speedo was perceived as the dominant brand, with the LZR and FastSkin being the dominant design:
“A dominant design in a product class is, by definition, the one that wins the allegiance of the marketplace, the one that competitors and innovators must adhere to if they hope to command significant market following. The dominant design usually takes the form of a new product (or set of features) synthesized from individual technological innovations introduced independently in prior product variants”  - (Utterback, 1994; p.26)
Despite other competitors such as Nike, Adidas and Arena offered very similar alternative performance suits; it is noteworthy that Speedo’s technology wasn’t the only element in making their LZR product dominant. Their networking ability, from both a technology perspective as well as an endorsement perspective allowed Speedo to become the most recognised brand in the swimming community. With the some of the world’s top Olympic athletes such as Michael Phelps (USA), Ryan Lochte (USA) and Rebecca Adlington (GBR) all being onboard as ambassadors, Speedo instantly connected with the market and a much greater customer segment. Any swimwear choice was ultimately Speedo.

However as highlighted by the critical event timeline below, rules and regulations introduced by governing body FINA in both 2009 & 2010 turn one of Speedo’s most exceptional innovations into a market failure. 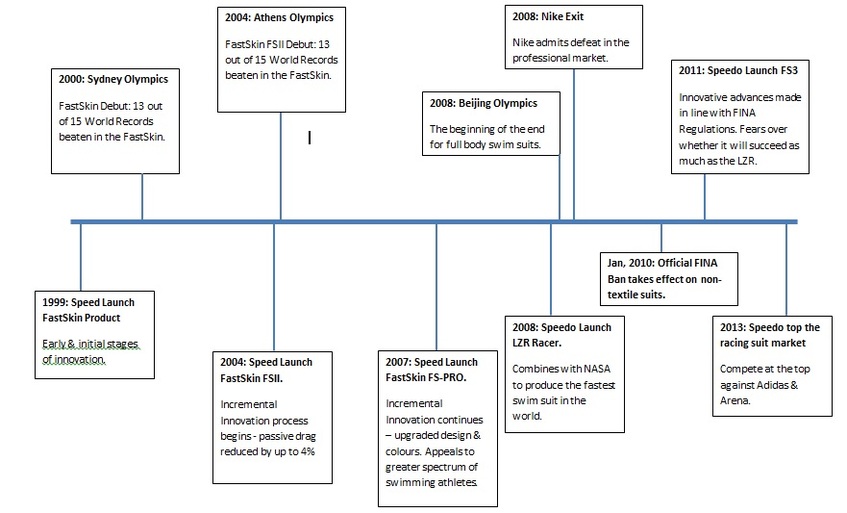 The recognition of governing bodies and the impact they have on innovation is a concept widely received (Allen at al., 1978; Abernathy & Chakravarthy, 1979; Moran, 2012) with Surez & Utterback (1995) stating

“Industry regulation often has the power to enforce a standard, and thus define a dominant design.” (p.4).

In this case Speedo’s once dominant, legal design turned invaluable and obsolete 8 years after the FastSkin was first released. FINA had the control and ability to remove the LZR racer as the ultimate swimming success to an illegal, unethical innovation overnight.

Despite FINA’s new regulations banning the LZR racer and all other racing suits on the grounds of unfair advantage, Speedo’s innovation strategy and reaction after these critical events reflect the company’s desire, leadership and innovative ability. As seen in the timeline above and discussed further HERE, a main competitor in the racing swimwear market, Nike, exited the market shortly after FINA’s review. Accepting defeat Nike decided to focus on its other core markets, rather than continue its involvement in a very competitive and regulated market. Speedo on the other hand managed to release the FastSkin 3 less than 12 months after the FINA ban was fully implemented. New and approved the FSIII did not only focus on a swim suit, but was innovative across its entire race wear product range. This idea that governmental regulations can also encourage innovation is reflected by Allen et al. (1978) who acknowledge:

“Government regulations, by establishing new criteria for defining a successful product or process, force innovation to occur, often in areas that have been long neglected by market or technological forces.”

With the ban only allowing knee-length suits for men and backless suits for women, Speedo introduced a FSIII swim cap and google set as an additional product offering. Although FINA’s ban was damaging to one of Speedo’s greatest innovations, their ability to react allowed them to regain their market leading position, revealing the company as one of the best in the swimwear and sporting industry.

"EVERYTHING COMES TOGETHER" FAST SKIN III 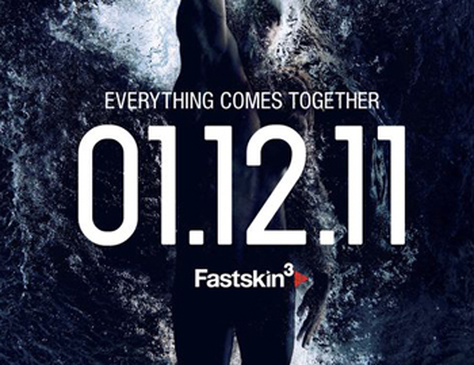